For this Audi R8, the experts at MTM added their Stage 1 tune, wrapped the car in a clean Inozetek Army Green by CWD Wrap, carbon fiber aero upgrades by Capristo and finally, a set of lightweight Vossen S21-01 wheels in Midnight Smoke

The Audi R8 (unbeknownst to all) shares a lot of components and solutions with its Italian counterpart. yes, you’ve guessed it, we’re talking about the Lamborghini Huracán. One could might even say that the R8 is the more understated brother of the much more exotic looking Huracán. And in more ways than one, they would be right. On the other hand, the Audi R8 is still one of the most beautiful two-door coupes ever to be revealed in the last several decades, bringing modern tech and exhilarating performance in a vehicle that can do its duties as a daily driver and as a track car equally great.

Design-wise, the Audi R8 showcases aggressive design lines, wide wheel arches and the impressive V10 engine. The second-generation Audi R8 V10 comes with a 5.2 liter FSI engine, delivering 533 horsepower and 398lb-ft (540Nm) of torque. Thanks to a 7-Speed S-Tronic transmission (coming as standard) and the famed Quattro all-wheel-drive system, the vehicle can launch off the line with impressive speed. 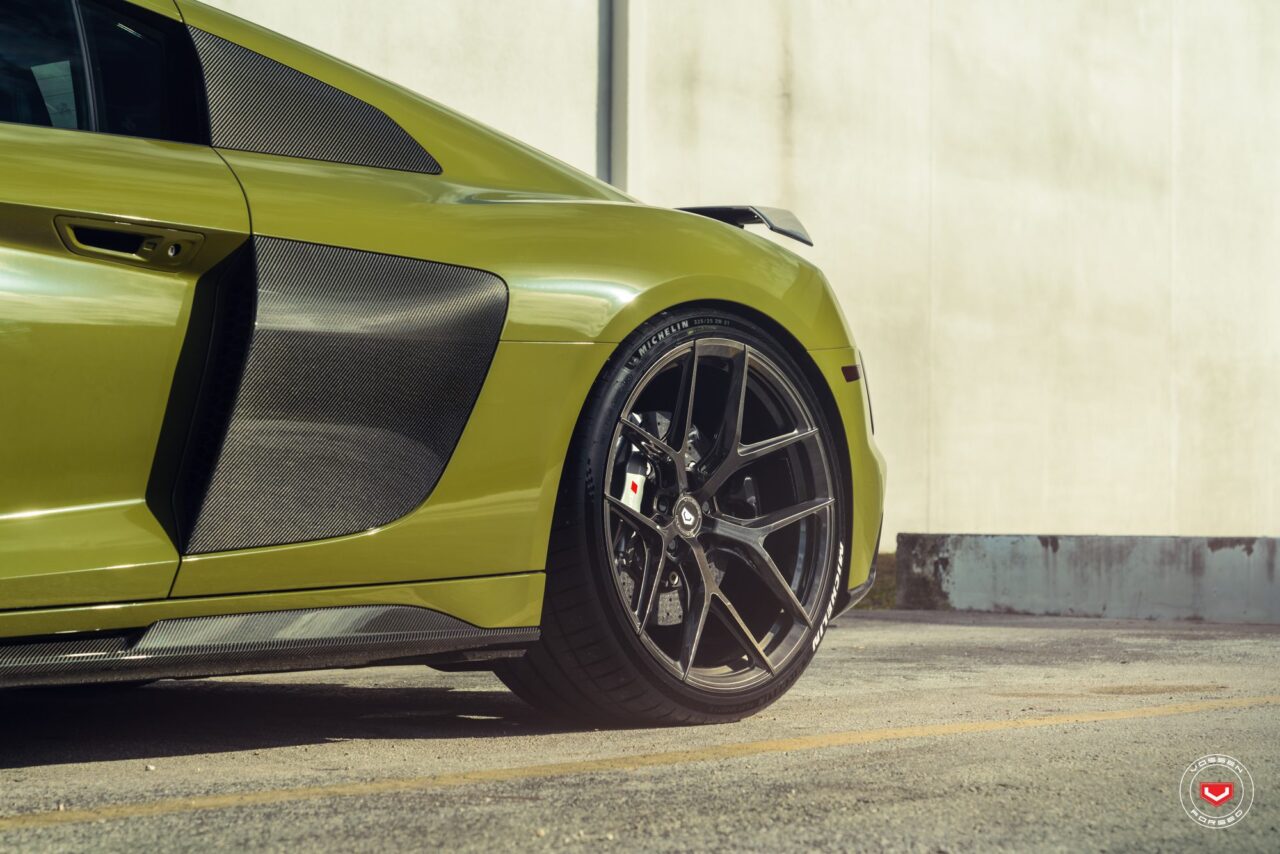 For the R8 V10, the 0-62mph (0-100km/h) takes just 3.6 seconds, a rather impressive feat for a vehicle weighing in at 3,616lbs (1,640kg). Overall, the Quattro all-wheel-drive system used on the R8 is slightly rear-biased with power delivery to the wheels variable. A water-cooled front differential and a passive limited-slip rear differential along with an electromechanical power steering contribute to the agile handling of the car. The variable magnetic-ride suspension is available as an option but is exclusive to the European markets.

And if all that wasn’t good enough for you, then you can always talk to the fine people at MTM and Vossen to give your vehicle a more extravagant exterior look and more performance.

The first thing you’ll notice on this Audi R8 is the sick looking Inozetek Army Green by CWD Wrap. While it might look like a darker shade of Mamba Green, it’s definitely its own color, creating a look we haven’t seen before. And in the world of tuned cars, that’s a must to keep your customers happy & satisfied. Naturally, giving it a nice looking wrap isn’t going to cut it for a car like this, so the owner went to MTM for some performance upgrades. 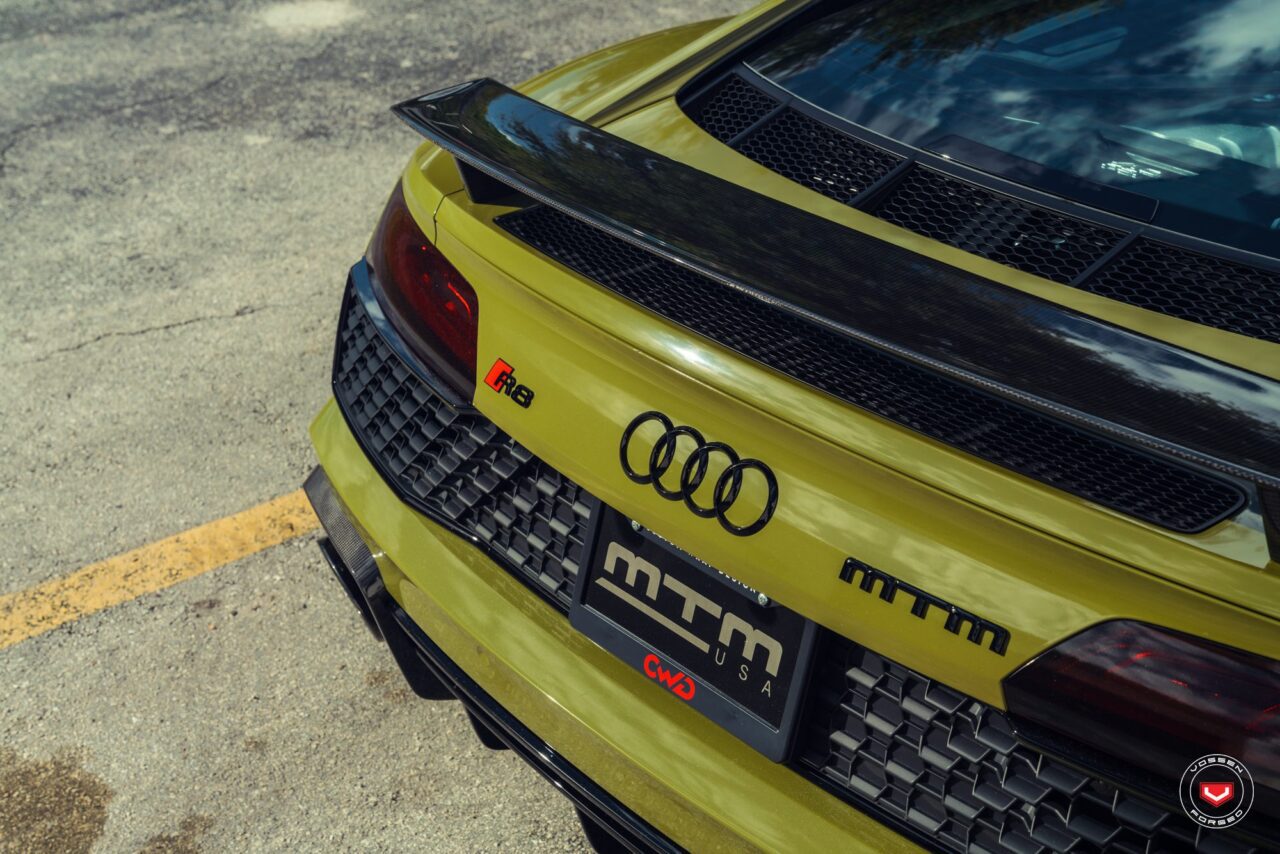 While this car has only the MTM Stage 1 tune, it still bumps the power to a respectable 635 horsepower and 590lb-ft (800Nm) of torque, adding a quite impressive performance boost over the factory figures. And judging by the usual upgrades on vehicles like these, the power is mostly seen in the mid-range RPM numbers, giving this R8 a more elastic and capable performance in higher speed situation, not just off the line.

In the visual department, this vehicle features a Capristo carbon fiber front lip, front canards and is equipped with a set of lightweight Vossen S21-01 wheels in Midnight Smoke with custom center caps with the V painted in white. And that’s all this car needed to pop!

You can take a look at this Army Gren Audi R8 build in the media gallery below.

Vanja K.
January 25, 2023
SUBSCRIBE TO OUR NEWSLETTER!
Learn more about the ins and outs of the automotive industry, get the most recent aftermarket tuning projects & builds, all the recent product releases and more, delieved to your e-mail thanks to our non-instrusive, pretty awesome, kickass MCP newsletter. Subscribe today!