What separates most aftermarket builds is the level of blood, sweat, and tears that are poured into them by the car’s owner. While some builds feature work done by a tuning shop, others are done mostly by hand, thanks to the effort exerted by their owners. This widebody Subaru Impreza WRX falls into the latter category.

The build started with the custom widebody. Unlike some other, high-profile projects to date, this one was done out of sheet metal. While CFRP (Carbon Fiber Reinforced Plastic) or FRP (Fiber Reinforced Plastic) would have been an easier way to do things, this old school way allows the owner to get fully hands-on and pummel body parts in place. It takes more time, more money and more cuts and bruises, but the end result is something that you won’t see every day. The widebody parts come in form of custom OEM style widened front and rear bumpers, a Battle Aero chassis mounted wing and a Beat Sonic sharkfin style antenna. The parts are finished with an OEM white paint finish, giving the widebody Impreza WRX an impeccable & highly impacting outer appeal. 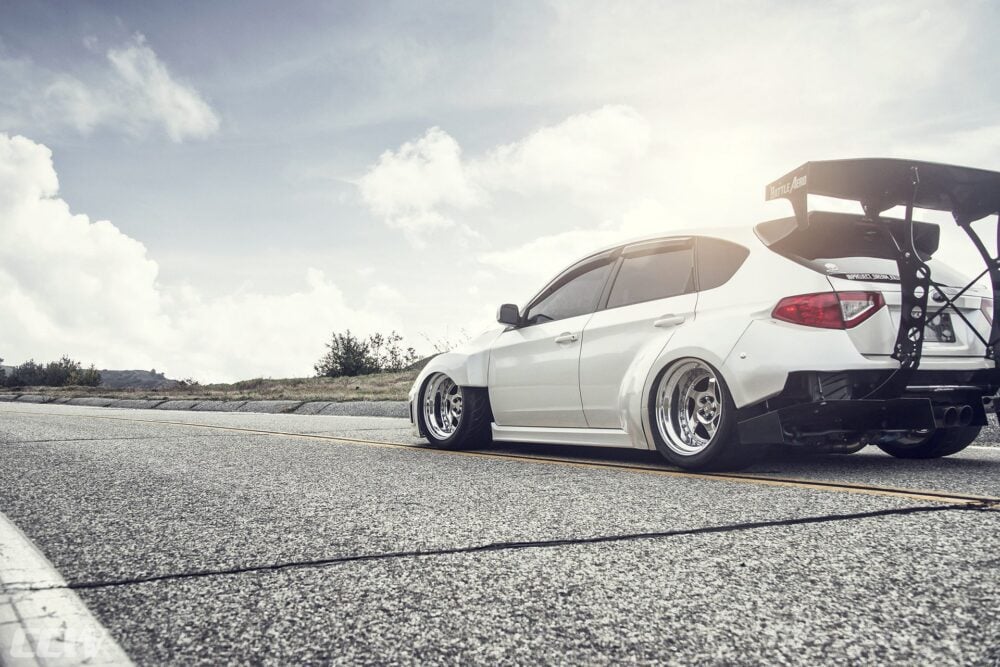 After the widebody panels were added, it was time to get the nature of this beast in check. This was done thanks to performance and suspension tuning which gave this Subaru Impreza WRX the high-performance punch to go with its aggressive looks.

The engine and drivetrain upgrades started with a Perrin front mounted intercooler, shorty intake, alternator cover and radiator cover. After that, a COBB Tuning 3-Port Boost Solenoid (BCS) was installed, followed by a set of Tomei UEL headers – allowing for much faster turbo spool up. After this, the owner installed a set of Invidia catless downpipes, allowing the turbocharged engine less exhaust flow obstruction, producing a better throttle response and a faster spool up time once again.

For an improved engine’s fuel/air mixture ignition, a set of NGK spark plugs – one step colder than OEM items – was also installed. The engine is further tuned thanks to a set of ACT PROLITE flywheels and an Action Clutch 6 puck 1MS stage three clutch system. Finally, the WRX is tuned by COBB on AccessPort2, allowing for improved engine management and better tuning results.

When the engine tuning was done, it was time to upgrade the suspension and handling as well. It all started with an AccuAir VU4 air suspension system with e-level sensors, combined with Viair dual 480c compressors, a seamless five-gallon custom painted air tank and custom routed copper lines. With these items, the owner can adjust both the ride height and stiffness, allowing his vehicle to be best suited for high-performance driving conditions as well as daily driving comfort levels. While an air ride isn’t as good for high-performance situations as a dedicated adjustable coilover system, it still is the best solution for people that want the best usage in these two driving scenarios. 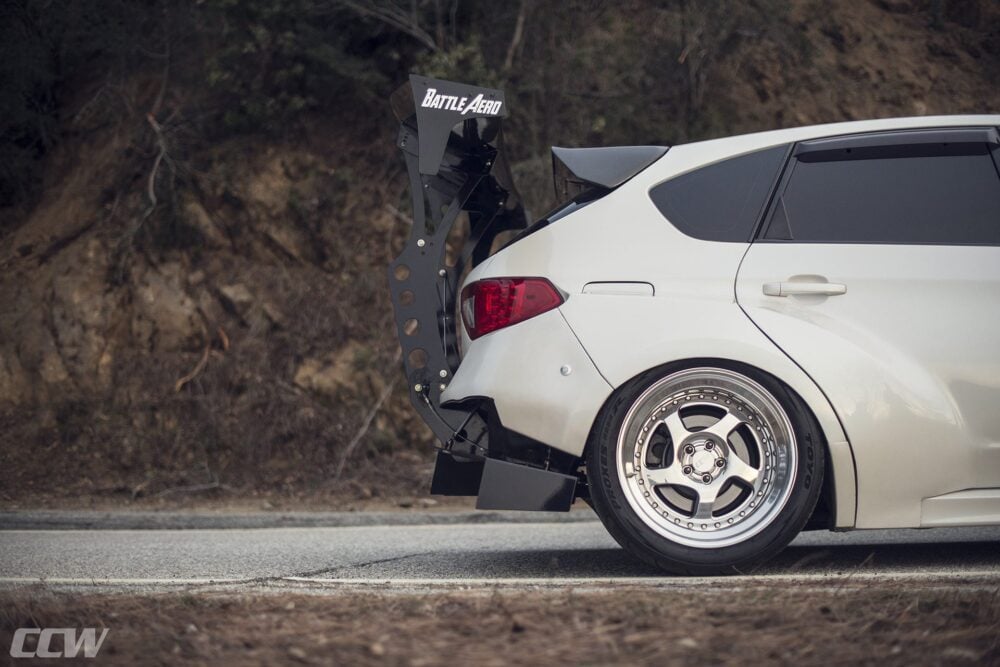 Finally, the build was completed with a set of custom-made CCW LM5T directional wheels. This widebody build features a set of wheels sized 18×13 wheels in the front and 18×13 in the rear. The wheels come with a -13ET and perfectly fill up those huge wheel wells. As for the finish, the owner went with a Polished Gloss finish. The wheels are wrapped in Toyo Proxes R888R sticky tires, sized 335/30/18 in the front and 335/30/18 in the rear, giving the owner impressive traction both on and off the track. The directional spoke style and deep dish configuration with a step lip finish this build perfectly.

With this build, we cannot shake the fact that every part of it was given a lot of thought to it. In the end, that’s what separates builds that get your blood flowing, from the ones that make you say: “Yeah, it’s alright.” This widebody Subaru WRX may not be everyone’s cup of tea, but it sure involves a lot of precision work, time and money spent on it. You gotta give it that. Grab a detailed look at the build in the media gallery right below.