The Audi A3 Limousine is one of the best looking small sized sedans available on the market today. Available in its most decisive and aggressive form – the Audi RS3 – the platform quickly garnered recognition by the automotive world. This is mostly due to its high-performance engine, impressive Quattro all-wheel-drive system and supreme handling characteristics that make the RS3 one of the most fun cars to drive. Thanks to its classy looks, the vehicle also garners praises for its visual appeal, making it one of the most coveted mid-range priced performance models out there.

The Audi RS 3 Sedan features a 2.5-liter TFSI turbocharged engine, most known for its unique firing order and inimitable sound. This engine in the RS3 produces a whopping 400 horsepower and 354 lb-ft of torque. The five-cylinder engine has a total displacement of 2.5 liters — which equates to 160 hp per liter. The maximum torque of 354 lb-ft is available at engine speeds as low as 1,700 rpm and remains constant up to 5,850 rpm. Consequently, the RS 3 Sedan can sprint from (0-100km/h) 0-60 mph in 3.9 seconds — a powerful force to be reckoned with. 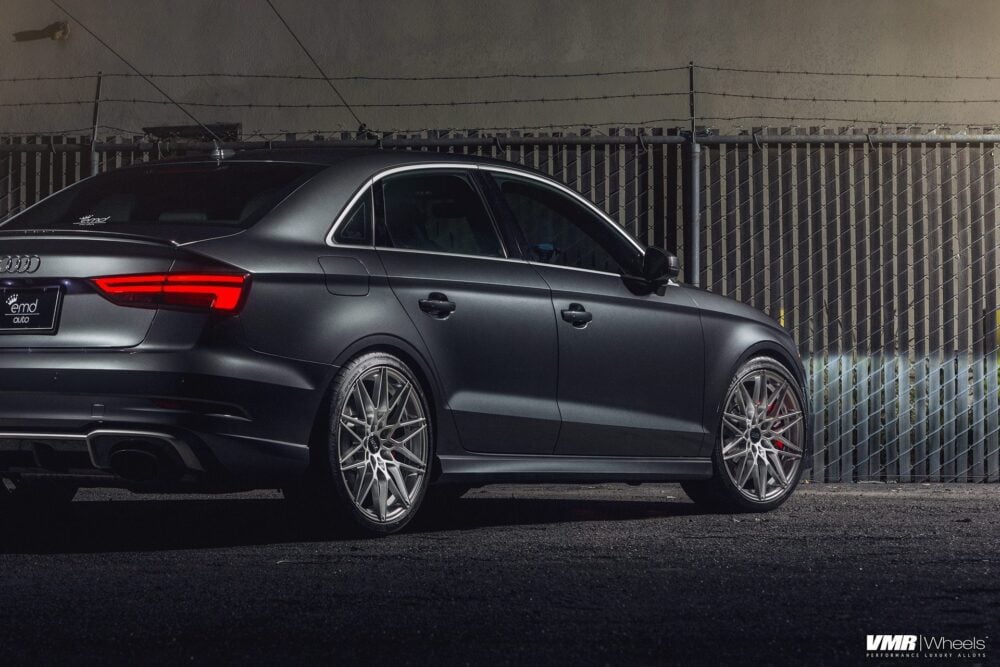 This beautiful Daytona Gray Pearl Audi RS3 comes further emphasized with a set of VMR 801 wheels. The wheels feature a full face mesh design with a modern twist. The VMR V801’s thinly milled spokes and diamond windows create a delicate and sophisticated look that’s brimming with detail. Finished in Hyper Silver, the V801’s not only compliment the color of the RS3’s ground effects kit, but its angular lines as well.

But, anyone interested shouldn’t dwell on it’s clean & svelte appearance; thanks to its flow form construction, the V801’s remain lightweight, yet incredibly strong. Engineered and tested to exceed VIA, JWL, and TUV standards, our V801’s are more than capable of handling whatever abuse the RS3 will put them through. For this build, the wheels come sized 19×9.5 in the front and rear, a perfectly sized setup that yields the best combination of looks and adherence to the specific demands of the Quattro all-wheel-drive system.

You can grab a detailed look at the complete media gallery of this Daytona Pearl Audi RS3 build right below.